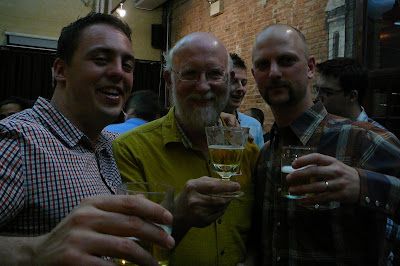 Our final destination, Goose Island, was made even more interesting when Randy Mosher invited us down to the brew share that was happening at the Island’s function room. Thirst Fursday (as in 1st Thursday) at GI’s included the ritualistic release of a new Goose beer, this month was the Goose Island Tripel which was tasting fresh, spicy and a touch zesty. It was served in style from a Goose tap head. 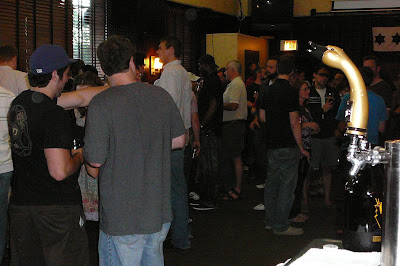 After a little tipple we headed over to the crowd which was gorging on a magnificent selection of some craft brews we had not yet encountered on our trip. Some of the more notable bottles were the Old Wooly Barley Wine (Big Time Brewing, Seattle), the Arctic Panzer Wolf Double IPA (Three Floyds Brewery which unfortunately had been cut from out itinerary) and an old favourite from our little sister New Zealand across the Tasman, the Armageddon IPA (Epic). 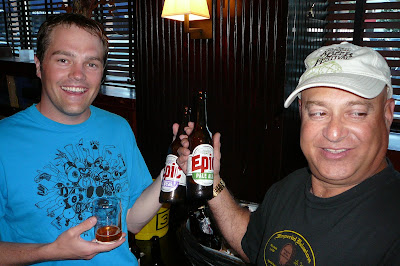 There was also a worthy selection of local Chicago home brews including an interesting dandelion mead and a pear ale. But the highlight of the night was sharing a glass of Randy’s home brewed Belgian Wit from a growler. Thanks for everything Randy (and we will see you at the Australian National Homebrewing Conference in October). 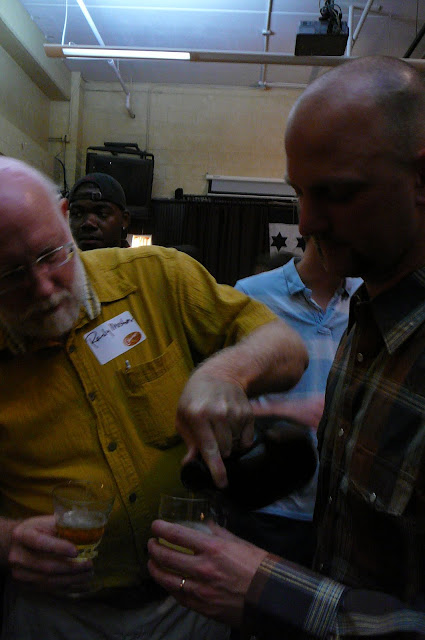 So thus ends the Great American Beer Adventure 2010, and where to from here? Well the focus will turn to home, Australia, where big things are brewing. Well known craft breweries from the west coast to the east and down to Tassie are planning or have already expanded capacity. There are at least two U.S. brewers down under set to unleash some serious Humulus Lupulus on the Australian palate. The front line is ever pushing forward. More craft beers are claiming taps and a major player will soon open a new city venue, while an old favourite will up the ante. Home brewers will carry the torch and will continue to innovate with big beers that defy an archaic excise tax.


We will continue blogging our beer adventures starting with our latest trip to Feral Brewery and Mash Brewery in Western Australia. Thanks for reading, and stay tuned.

Where beer is, we hope to be. 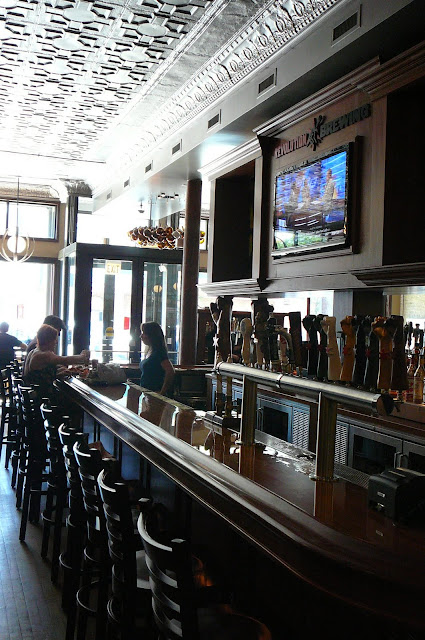 North-west of Chicago City proper, Logan Square ia a predominantly Latino neighbourhood with relatively low cost housing.  Not really a place you might expect to find a newly opened cosmpolitan brewpub.  Aptly named 'Revolution' this trendy new bar with a high level of quality food had been highly recommended by our contacts in Detroit and Chicago.

Opened in Frebruary this year, Revolution is a superbly put together venue. They don't yet bottle or keg so everything is served directly from the tank. They share their tap lineup with other local craft and worldly brews and have a well rounded bottle list of 62 beers.

We started with a flight of the six house brews available.
- Workingman Mild
- Bottom Up Belgian Wit
- Iron Fist Pale Ale
- Eugene Porter (which was the favourite)
- Coup de Grace Saison
- The Whip Wheat IPA (notable for its use of the Japanase Sorachi Ace hops)

As we worked our way through the flight, the knowledge of our bartender and the quality of the food became apparent.  We really should have organised this as a six course degustation. But by the time we started matching beer to food we had moved onto the guest beers.  Not as a snub to the house brews, but because they were beers you just couldn't go passed.

First up was the Founders Diablo Noche Black India Ale, which was well balanced, restrained yet a full dark malt character and a good punch of hops, a suitable match for the applewood smoked wings w/ blue cheese potato salad and dipping sauce.  Other interesting appetizers were the bacon fat popcorn, sweet potato cakes and the range of four types of bruschetta (particularly the roasted cauliflower, white bean, arugula & lemon-infused oil). 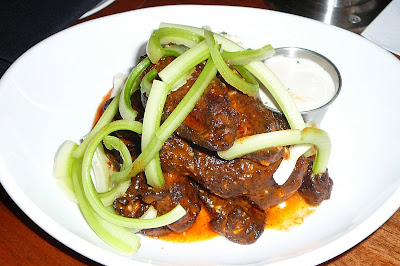 We'd had some good wings, but these took the cake! 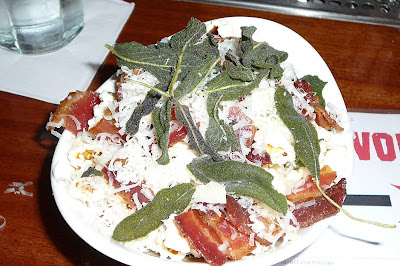 Americans seem to always find a way to get more fat into their food,
but the bacon fat popcorn was surprisingly delicious! 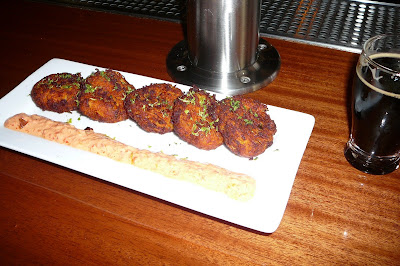 Sweet potato cakes w/ roasted red pepper yogur, a tasty vego option.
Though our stomachs were bulging by this stage, the Dogfish Head Immort Ale (a barley wine brewed with peat-smoked barley, juniper berries, vanilla & maple syrup) seemed like the perfect match to the locally produced Creamy Sexy Blue (Great American Cheese) served with poached apple, candied wallnut and drizzled with honey...a match made in heaven!!
We were done....no...but wait, there's more!  We had apparently drunk the Dogfish Head barrel dry and this made way for the New Holland Brewing Dragon's Milk Ale, a strong ale aged in oak.  This was the perferct excuse to try the house cherry bourbon cake! 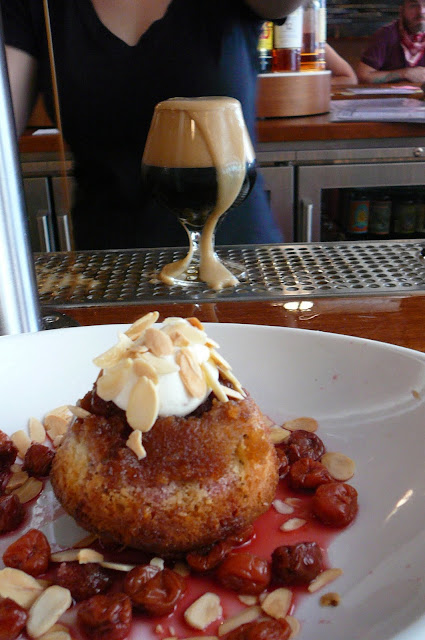 Overall, our experience at Revolution was excellent due to the following factors: the beers were solid and they had a great guest line-up complemented by a big range of quality bottled beers.  The food was awesome, some of the best we'd had on our trip.  Most importantly, the staff were friendly, informative, had a good understanding of the product and were actively interested in their role not just from a customer service aspect (ie. tips) but in delivering the overall beer/food experience.  Revolution stood out as one of the most impressive beer & food centric venues we had seen.

Alas, we couldnt stay there all night.  We had a date with Randy Mosher and a brew swap meeting at Goose Island Brewpub!  Our final Chicago post, yet to come. 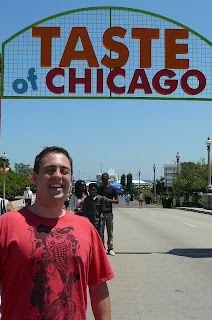 A much needed sleep-in meant a late start to out first full day in Chicago.  Our first stop was Taste of Chicago in Grant Park.  Other than the plethora of doughy, fried sugar coated foods, the more interesting fare on offer included caramel & cheese popcorn mix, pork filled banana dumpling, mustard fried catfish, mango cumin fries and frozen hibiscus leaf tea with whipped cream to name a few.  The only beers on offer were Stella, Heineken and Bud.  We needed to find a good bar fast!

We didnt realise the scale of our map and wound up walking through one of Chicago's toughest neighbourhoods, Cabrini Green.  Our destination was the Map Room, but on the way we found a cool neighbourhood bar in North Damen called Big Star, a converted auto garage with a beer garden out front.  The set-up was very similar to Apex bar in Portland, though the beer garden was more for table service only and drinkers were encouraged to sit at the bar.  Enjoying communal tables outside was clearly not part of the equation.  We drank the Lost Abbey Devotion, Lagunitas Pils and one final Green Flash West Coast IPA for our lost comrade, Tom whom we had left in New York.  It was interesting to note that of the 6 beers on tap, 4 were from the west coast. 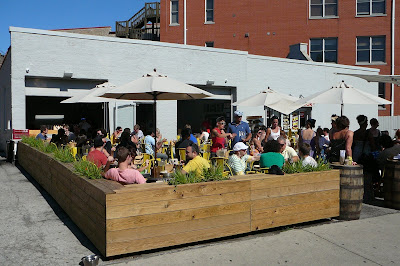 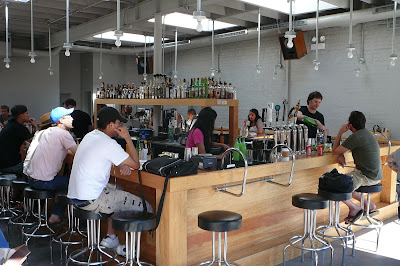 Our final destination for the day was the Map Room.  They had around 24 beers on tap and a hand pump (empty at the time).  Our contacts in both Chicago and Detroit and recommended this bar highly.  A long bar with nice high ceilings and a nice roomy area in the rear.  The taps were a nice spread of international and local brews and a good bottle selection (though our first 2 choices were unavailable).  We drank the Three Floyds Hop King, Kostritzer Schwarzbier, Kaimai Porter's Rye Ale (New Zealand) and the Daisy Cutter Pale Ale from local brewery Half Acre. 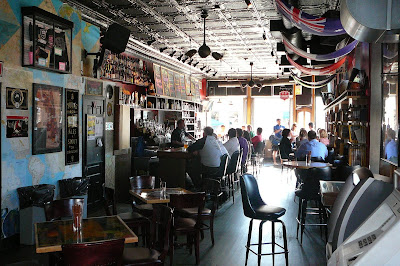 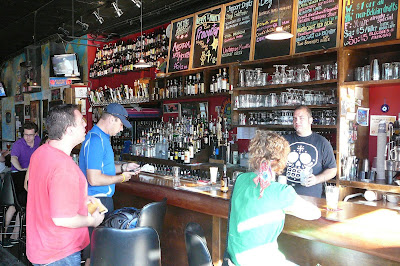 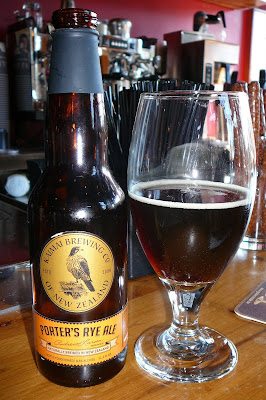 We were treated to a tour of the coolroom, keg room and the firkin cooler. 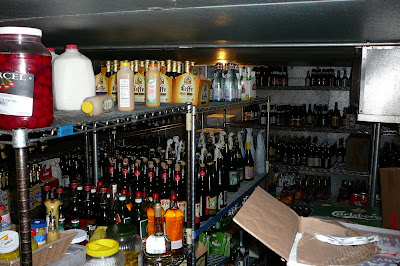 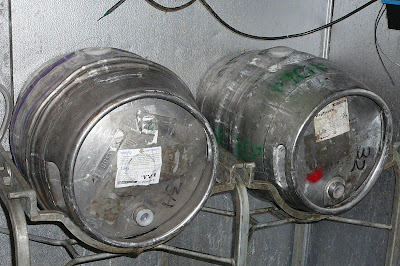 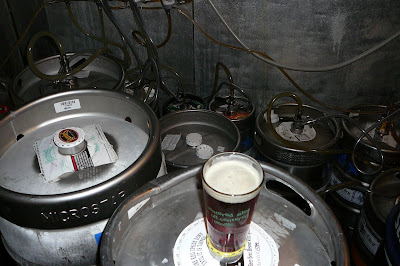 It was interesting to chat with Laura (Owner) and discover they have had similar issues with some designs of disposable kegs.  Better designs such as the Key Keg, developed in association with Weihenstephaner have helped brewers like Mikkeller and Brewdog reach markets further afield.  Some brewers we have met have mentioned informally that they are thinking of exporting using the Key Keg.  As this technology becomes more widely used, it will be interesting to see what new draught products arrive in Australia (and what potential there is for Aussie craft brewers to export).
Posted by Beer Ambassador's-at-Large at Saturday, July 03, 2010 6 comments: 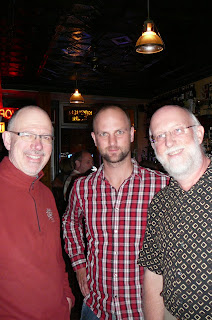 Ray Daniels, Barney & Randy Mosher at the Hop Leaf, Chicago
Our journey through the States has shown us that it is not hard to find a bar with an amazing range of beer. It is hard, however, to find knowledgable serving staff. Bartenders that can make recomendations based on a discussion of flavours or beer styles.  Enter Ray and Randy.  Ray runs the Cicerone program, a course designed to educate and certify beer sommeliers to industry standards.  Randy is an accomplished designer and specialises in the develmopment of craft beer brands.
Together these two are forging a strong focus on craft beer quality.  Not only in how it is produced and marketed, but how it is served and enjoyed along with beer/food matching.  We met up at the Hop Leaf for a bite and some good beers.  Beer standouts were the Lost Abbey Devotion, Three Floyds Alpha King and the Surly Brewing Co Bender.  The Cicerone course has now been modified for European students.  Topics such as the U.S. three tier system have been removed and measurements have been converted to the metric system.  Anyone wishing to pursue the Cicerone qualification should check out the website.  The first level is the Beer Server and can be completed online for free.  The Certified Cicerone will take a little more study, though the study resources are readily available.  Currently the exams are held in the U.S....but who knows, if there is a large amount of certified beer servers in Oz, perhaps there may be a possibility in the future to sit the Certified Cicerone program there!
Posted by Beer Ambassador's-at-Large at Friday, July 02, 2010 No comments:

In The Begining There Was Home Brew 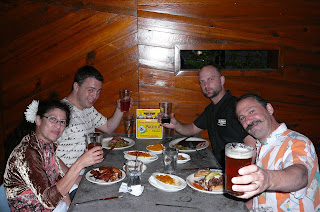 This beer adventure has shown us a lot. On the west coast we saw the heights of hop-forward beers. In Colorado, we got to know big bold mountain beers. Up in northern California, we saw first hand how some big breweries like Sierra Nevada retain thier craft roots yet strive for best practice in brewing ops. In Oregon and Seattle, cosmopolitan dining stole the show. Manhatten was slick and fast while Brooklyn was a solid scene and down to earth.

However, we hadn't yet taken a good look at the foundations. The movement that threads all these places and beer styles together, home brewing.

Meet the 2Cicerone's. In a leafy suburban street live Annette and Mike. They are both certified Cicerone's, Annette manages a bottleshop with Michigans biggest beer selection and Mike is an avid homebrewer of more than twenty years. The beer he creates is nothing short of amazing. 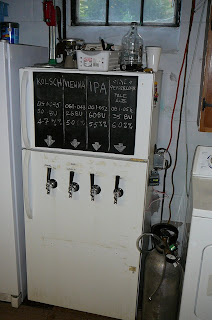 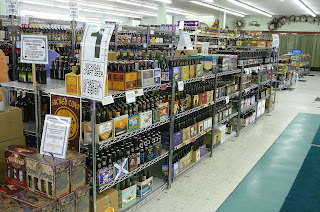 Lefe: Mike's fridge with some tasty home brew!
Above: Michigan craft beer aisle at Annette's bottle shop.
We were lucky enough to have his Kolsch, Rye Peppercorn Ale, IPA and his Imperial Pilsner, which was worth the flight tickets all on it's own!

During the day we went out to the Jolly Pumpkin Cafe & Brewery in Ann Arbor, Detroit, brilliant menu by the way, smokey wood fired pizza's went perfectly with the Bam Bier, Bam Noir and Belipago.

At the brewery the full extent of their operation sets you back a little. Not only have they dedicated their brewery exclusively to barrel aged sours, but sour beer gods Cantillon have donated wooden barrels to the brewery.  It seems the sour beer gods approve! 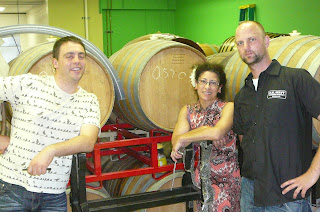 We ended up at Slows Bar-B-Q for dinner, about as high end as American BBQ gets. Ribs, wings and pulled pork at their finest. Not to mention a cracking tap range! 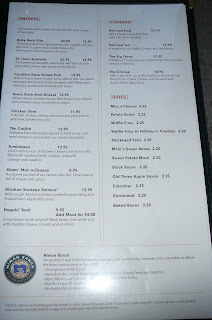 Back to 2Cicerone's abode where we took a little historic tour through elusive and almost extinct beer styles such as Gose and Berliner Weisse.  The night finished on a cracking Blood Orange Wheat Wine from Michigan brewery Short's. 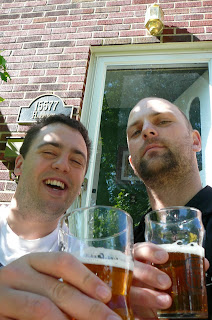 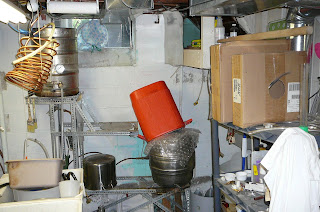