A West Side Story 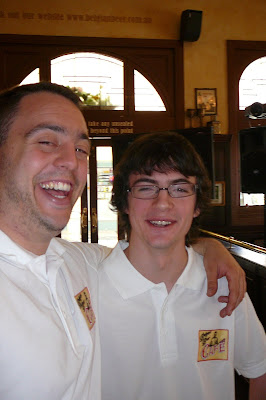 The Beer Hound and Beer-Boy Wonder attended the Draught Masters in Perth recently.
You will be happy to hear that a couple of Beer Ambassadors took out the Victorian state finals for the World Draught Masters. Which meant a couple of flights to the Australian Grand finals, in Perth. (thank you very much Stella Artois!)

But we couldn't spend a whole two days in WA without visiting a couple of Breweries.


We dropped our bags at the hotel and jumped a cab straight out to the Swan Valley but not before a quick pint of Hob Goblin Ale at the Moon & Six Pence, a homely English pub with a lengthy tap list.

Just thirty minutes from the CBD, situated in the Swan Valley, Feral Brewing Company looks like a big old Aussie homestead. A long wide veranda that overlooks paddocks and sheds with a couple of chooks scratching about.

The seats in the taproom were empty, but there was a line for beer a dozen people long. Everyone who could, had taken a sunny seat on the porch. Will Irving from the brewing team, came out to talk (drink) beer with us. 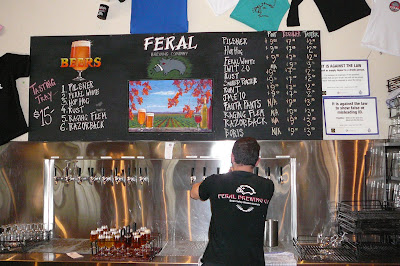 Will took us through the available range, fourteen in total. Their Imperial Stout "Boris" at 11.5% was syrupy and smooth, displaying superb balance. But the Farmhouse Ale won the crowd. The complex blend of spice/citrus flavours and the dry finish of this traditional farmhouse ale was just the right beer to acompany a tour of Feral Brewing operations.

Will took us on a unique tour of their aging barrels. The word "funky" doesn't even begin to describe the range of aromas. 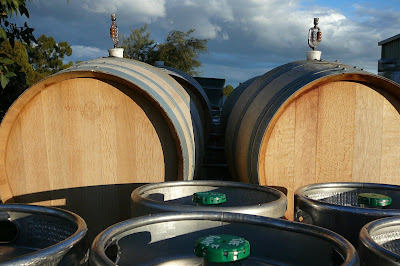 Our cabbie stood us up, so Will kindly offered to drive us to the next destination Mash Brewing the first of a series of WA based brew pubs under the same name (Rockingham to open soon). Where we met Head Brewer Dan Turley and Brewery Owner/Operator Brad Cox.

The Mash team laid down the royal treatment (it is always great to catch a brewery team as they are knocking off). Grant and Dan took us through both their brews and bites. The Westcoast Wheat with the Szechuan pepper squid for the win! 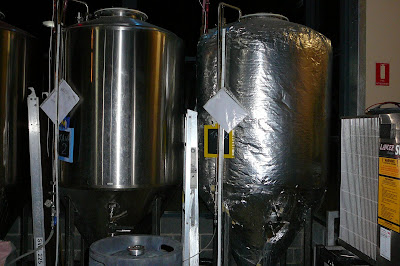 The night carried on and the boys were nice enough to crack a couple of bottles of Liefmans Goudeband (a beer we had also spotted tucked away behind the scenes at Feral). Pretty much the perfect night cap. Then we were off home to bed.... after a couple more pints at the Moon & Six Pence. The Twisted Thistle IPA on tap was a little too good an opportunity to go past.

The big day, the Australian World Draught Master Finals. We were down at the Belgian Beer Cafe by 10am and knocked out of the comp by lunchtime.... brilliant! Now the stress is over lets work our way through the menu (in other words, drown our sorrows that we lost the opportunity to compete in Belgium!)

Competition finished up later that evening and the celebrations were in full swing, the winner was Siobhan representing South Australia, and they couldn't have found a better representative. The Westende team put a lot of work into showcasing high end Belgian beer. Venue Manager, Paul Runciman was even kind enough to open a bottle of the Bush Prestige. The Prestige is the barrel aged big daddy of the Scaldis Noel. Not too sweet, not too sour, just rich nectar flavours and texture, very smooth for 13%abv.

Although the night continued, the beer goodies were well behind us. And so ends another Beer Ambassador jaunt, until next time always remember "the best beer is the next beer".
Posted by Beer Ambassador's-at-Large at Sunday, August 08, 2010 1 comment: