The Holy City of Portland 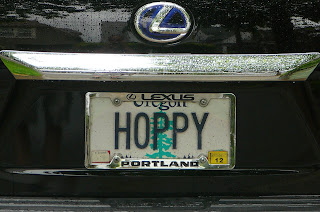 Welcome to Portland, a city whose claim to fame is that one in every two beers consumed is a craft beer!  Our focus in Portland was to the bar scene.  We had done a number of breweries on the West Coast and Colorado, but it was now time to cut loose with no host to maintain any amount of dignity in front of. 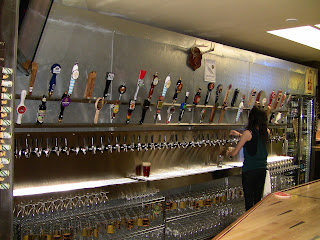 Our first stop was a brand new beer bar just opened in a funky neighbourhood.  Apex had a large selection of draught beers, a pretty sick bicycle rack and a good sized beer garden.  It was previously a gas station and the open doors from the bar lead out to the beer garden providing a cohesive vibe between the two. 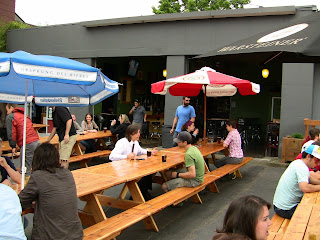 Our host in Portland, Matt Sage from Bridgeport took us out to Goschie Hop Farm, one hour south of Portland.  Gayle Goschie, 2nd generation hop farmer, showed us the ins and outs of hop farming.  Recently the big boys have cut back their buying which has brought craft beer needs to the fore.  In the last few years, Anheuser Busch have reduced their buying from this farm from 320 000 pound to 90 000 pounds.  We saw probably 100 bails of 200 pound tettnang hop flowers sitting in a warehouse waiting to be dumped.  It is no coincidence that Gayle will be turning her hop growing efforts to suit the need of the craft beer market. 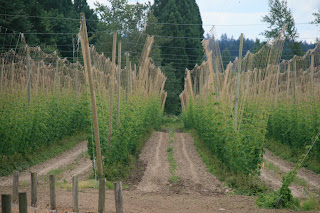 \
Bridgeport Ale House was a long awaited experience.  So far we had visited bars attached to breweries and a number of neigbourhood bars with a casual approach to beer.  Bridgeport Ale House had a refined atmoshere, solid brews and a good food.  Favourite was the IPA served directly from the tank.  Check out the specially made hop jack below (designed to maximise some seriously limited space in the brewery). 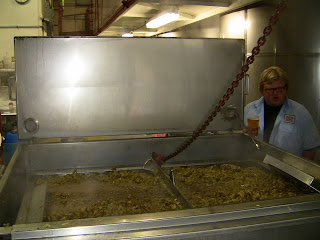 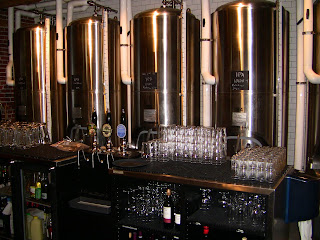 The second day included a number of bars...things did get a little sketchy, but i know we started of at Henry's 12th Streeet Tavern...somewhat of an institution..not of the beer bar variety (though the 100 beers on tap did satiate our requirements).  This was more of a fancy downtown hotel bar, lots of cocktails and some decent pub grub (check out the onion rings below!) 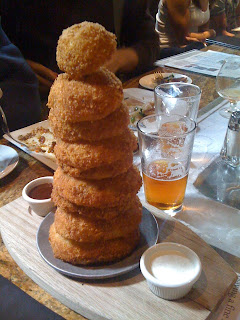 Probably the best pub we found was Horse Brass a traditional english pub a short cab ride out of downtown.  In addition to a great selection of local brews, this quaint timber-laden bar had a good selection of internationally acclaimed brews such as Weihenstephaner and Affligem.  The passionate and knowledgable staff didnt make it hard to pursuade the uninitiated to jump from local to global.  We even shouted some locals a bottle of Duchesse de Bourgogne.  I am ashamed to say, the West Coast IPA had worn a little thin by now.

Our next stops was, we think, one of the true evolutions of bottleshop retailing, Belmont Station.  A bar where you could enjoy a good slecection of beers with some nice snacks...and right next door, a bottle shop with a more than reasonable selection (over 1000), many of which were in the fridge.  Customers were allowed to select any beer from the bottleshop and drink it in the bar.  The staff were very helpful and the range was not just American...they had a damn fine Belgian collection. Staff were knowledgable and very helpful.

Green Dragon, which has recently been bought by Rogue.  A farily small operation with some open seating good drinking areas.  Sadly, since the buy-out, the brewery only brews one beer (of which we didnt have....were were in and IPA mood).  However, time was short and the news of 12, 000 naked cyclists through the streets of Portland was causing a bit of a tingle.

The third day was a visit to Deschutes, a great example of the Portland Brewpub beer scene.  Here (as well as Bridgeport) the scene is not just about the beer.  The food, the wine, cocktails, decor, music, coolness.  It seems anybody who is anybody in the brewering industry needs a flagship venue.  A favourite food and beer combo was the Deschutes Porter with Elk Meatballs served with dumplings, in gravy and sour cream. 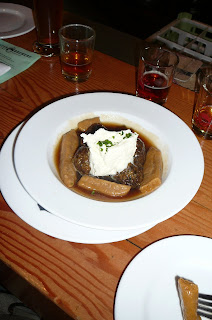 Altogether Portland had a lot to offer and the four days we had alotted (two or three days more than most cities) were not nearly enough to cover all the ground in this vibrant beer scene.

A good website to check out if you are Portland bound is http://www.taplister.com/
Posted by Beer Ambassador's-at-Large at Tuesday, June 22, 2010